Click any photo to enlarge. Use the arrows to scroll through the images.

Harvey and I recently returned from a wonderful trip to Poland with my mom, cousin and niece. Poland is a beautiful country with warm and friendly people, really good food, and beautiful landscapes and culture. It's important to keep in mind that this country was wiped off the map three times in the 18th century then flattened during WW2 by the Nazis and the Russians with the intention of eliminating it forever. It is both sad to think the human race can destroy itself so many times and yet inspiring and uplifting to know how resilient is the human spirit. I am proud to be of Polish decent!

We were in Gdansk for three days. Here is where WW2 began with Hitler's invasion on Sept. 1, 1939. It is also the birthplace of the Solidarity movement which eventually won freedom for Poland and set in motion a chain of events that led to the downfall of the Communist block. We also ate in Union leader and first president Lech Walesa's favorite restaurant (he wasn't there that night). It was also a free, independent city-state between 1920 and 1939 when it was neither German nor Polish.

After Gdansk we traveled to Malbork to tour the 13th century castle of the Teutonic Knights, the largest brick Gothic castle in the world and a UNESCO World Heritage site. Then it was on to Toruń, founded in 1231 and also a UNESCO World Heritage site as well as the birthplace of Astronomer Nicolai Copernicus. While in Gdansk we finally met a cousin I have been corresponding with for a while! She makes a great cherry liquor! :-)
Our third stop was Warsaw. We visited the Old Market Square, beautifully rebuilt and meticulously restored after being destroyed in WW2 (and another UNESCO site), and the birthplace/museum of Marie Curie and Łazienki Park.
From Warsaw we travelled to my grandparents birthplace, the town of Łomza and had wonderful meals and visits with two of my mother's cousins. 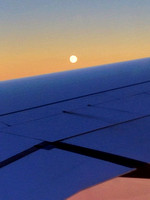