“Spirit of the South"

A Photo Exhibit Celebrating the Beauty of Southern Italy

My Italian roots are in Cautano, a small village in the Campania region of southern Italy. My family there is as dear to me as my family here. I love sharing meals and laughter with them, discussing our cultural differences and similarities, and visiting and re- visiting places where my grandparents once lived.

In August 2011 I combined a visit with my family with a visit to Matera, in the remote southern region of Basilicata. My interest in this area began when I read Carlo Levi’s masterpiece Cristo si e’ fermato a Eboli (Christ Stopped at Eboli) in Italian class at Nazareth College. Levi’s poignant description of life in this forgotten place, the thousands of years of history, the architecture, the geography, and the plight of the people captured my imagination. I just had to see it with my own eyes...and my camera.
From February 4 - May 25, 2012 a selection of photographs of this trip will be on display in the Casa Italiana LeChase Lounge at Nazareth College. In this exhibit you will see images of these less well-known places - the historic, the modern, wide vistas and intimate corners, city and village, in the bright sun of “il mezzogiorno” and the deep shadows of night.

Celebrating Family!
This exhibit coincides with the 100th anniversary of my grandfather Giuseppe Rillo’s immigration from Cautano to New York. After a two week trip on the steamship The America he arrived at Ellis Island on March 27, 1912. The children, grandchildren and great-grandchildren of his brother still live in Cautano. It is to him and my grandmother Angela Maria Vetrone Rillo, also from Cautano that I dedicate this exhibit.
© Angela Possemato ~ Light Touch Photos 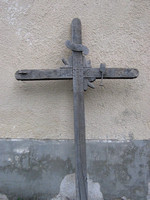