Matera is a town in the region of Basilicata in southern Italy that has been inhabited since the paleolithic period. Early inhabitants dug caves into the soft tufa rock. It is one of the best examples of ancient cave dwellings in the world. In the 8th & 9th monks hid from persecution in the caves. Over the centuries the area was ruled by the Lombards, Saracens, Byzantines, Aragons, Normans and others.


Eventually the region became overcrowded and malaria was epidemic. Families of 12-18 lived with their animals in the cave dwellings in extreme poverty. Carlo Levi, exiled to Matera by the Fascist government in the 1930's, brought attention to the living conditions of the people with his 1945 book Christ Stopped at Eboli. In the 1950's the government moved everyone out of the caves into a new, modern planned city.


The old city was vacant until the 1990's when it became a UNESCO World Heritage site. Today shops, restaurants, hotel and some private residences have moved into the caves, renovating them into modern, comfortable places yet retaining the cave atmosphere. see also: https://www.neverendingvoyage.com/sassi-matera-italy/ and
http:/​/​en.​wikipedia.​org/​wiki/​Matera http:/​/​whc.​unesco.​org/​en/​list/​670

> click on any image to enlarge, use the arrow keys to scroll through them.
© Angela Possemato ~ Light Touch Photos 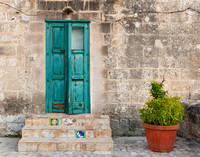